A-Simple-Christian.com
--- I am the Righteousness of God in Christ ---
Menu

Story of The Christian Fish

Origin & Meaning of This Christian Symbol

The Christian fish also known as Jesus fish has gained popularity today. You can see this Christian symbol printed on bumper stickers or window decals which many Christians placed on the bumpers, windows or windscreens of their cars.

You can also see this symbol on jewelry and other Christian gift products. 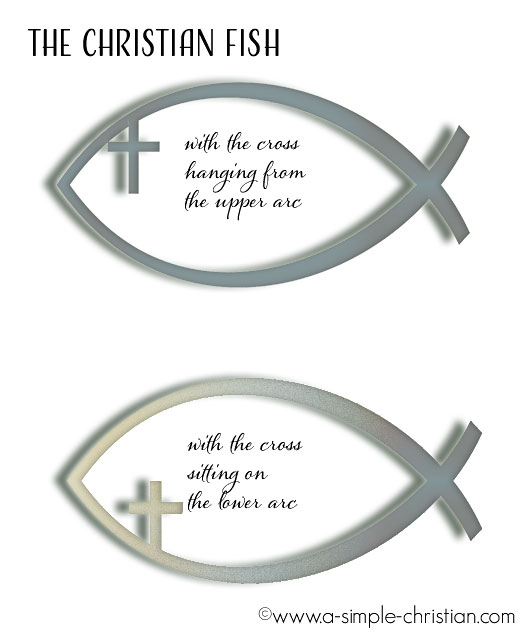 Two Designs of the Fish Symbol

The Origin of the Christian Fish Symbol

Originally, the fish symbol, two interweaved crescent moons, was used by the Greeks, Romans and other pagans as a symbol of fertility usually associated with goddesses.

During the life of Jesus, fish was a stable food for the people and we see many instances where fish was mentioned in the four gospels.

For example, in the calling of the first disciples, Jesus met Simon Peter, James and John while they were mending their nets after toiling for the whole night without catching any fish. Upon obeying Jesus' words, they caught so much fish that their nets began to break.

Another example, after listening to Jesus' teaching till late in the day, the people were hungry and Jesus fed them (five thousand of them) with five loaves and two fish.

So it was not surprising that the early Christians chose the fish symbol as a password or secret symbol when they faced persecutions for their faith during the first century after Christ. And as it was widely used by Greek, Romans and other pagans during that time, it was a symbol that will not aroused much suspicion. The Christian fish symbol was then used as a marking on tombs and other secret meeting places by the early Christians.


It is said that when strangers meet, the Christian will draw an arc on the ground and wait for the other to respond.

If the other is a Christian, he will respond by drawing the lower arc to form the outline of a fish.

If the Christian did not received any response from the stranger, he will just quickly erase the drawn arc on the sand.

Other Instances When Fish was Used by Jesus in His Ministry

Matthew 13:47: "Once again, the kingdom of heaven is like a net that was let down into the lake and caught all kinds of fish.

Writings of the Early Fathers

"...if you join the initial letters of the five Greek words which mean, 'Jesus Christ the Son of God, the Saviour,' they will make the word, that is, fish, in which word Christ is mystically understood, because he was able to live, that is, to exist, without sin in the abyss of this mortality as in the depth of waters."  ~ St. Augustine of Hippo (354 - 430)

The Meaning of the Jesus Fish Symbol

Most of the Christian fish symbols used today is embedded with this acrostic or the word JESUS as is illustrated by the pictures below.

Other Variations of the Christian Fish 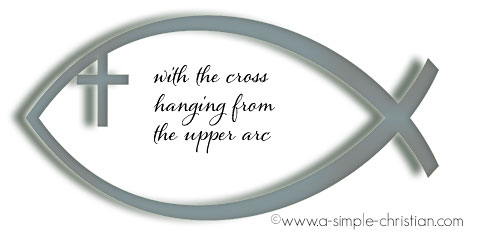 The fish symbol with a tiny christian cross inside hanging on the top arc. 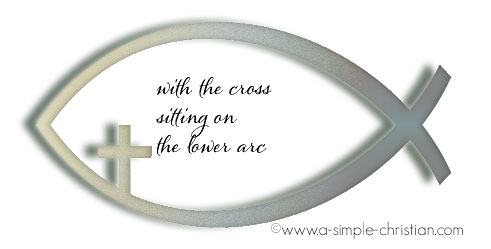 The fish symbol with a tiny christian cross inside standing on the bottom arc.


Christian Fish Symbol in Christian Gifts
and Other Products


Help Me Spread the Word!

If you like and are blessed by the articles in A Simple Christian and believe that others can benefit from them, then please help me share this website with your friends. Just click on the share buttons below to tell your fans and friends. Thank you for sharing the good things in life. God richly bless you with His manifold blessings:-)

Let me know what you think about what you just read. Leave me a comment in the box below.

Top of Story of The Christian Fish Symbol

Hello!
My name is Flora Tan.
I’m a crafter, web publisher and above all, a simple Christian practicing letting go and embracing God moment by moment.

Motto in life: None but Christ!
Daily Declaration: I am the Righteousness of God in Christ.

News from A Simple Christian

You are not alone!
Sign up for my e-newsletter and be encouraged.